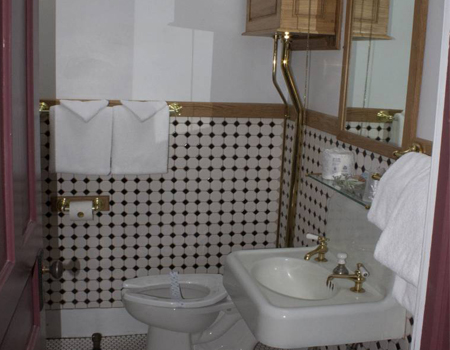 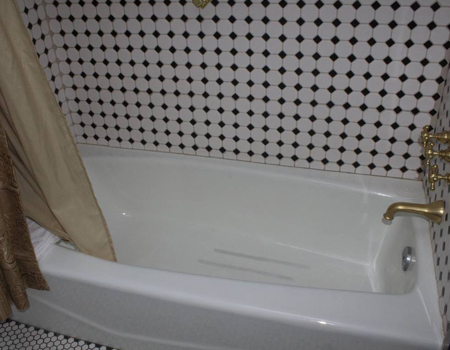 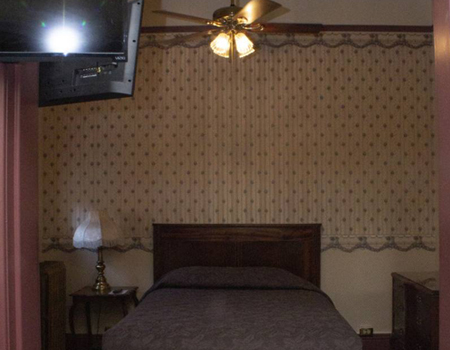 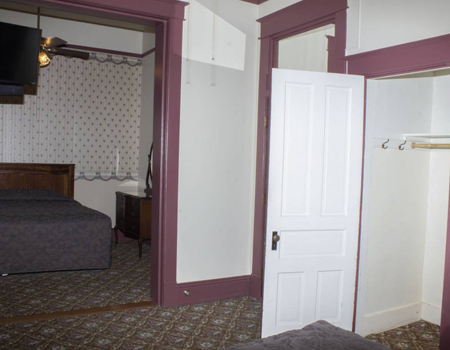 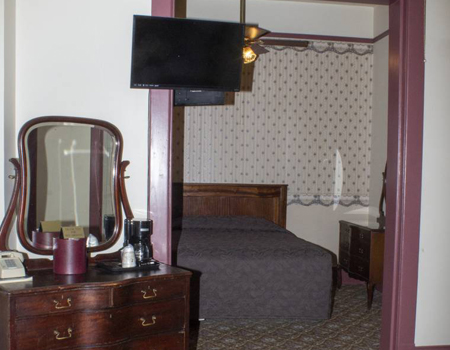 This historic room is as named after a true pioneer in her own right; not just a dentist’s wife but a business owner, founded of Christian Science church, and founder of the Buffalo Bill Memorial Association in the great Yellowstone region. This room is located on the second floor, this suite offers lavish historic furnishings, full size closet, a skylight, two windows, two sinks, and two TVs. The suite has two Queen size bed in separate areas, accommodating four guests.

Mark Chamberlin was Cody’s first dentist. He and his wife, Agnes, arrived in August 1900, bringing with them their belongings, a team of horses, a covered wagon, and a dog.

The Chamberlins had visited other Wyoming towns but were impressed with the spirit of Cody and elected to stay. They were assured that a long time had passed since the last traveling dentist had passed through and that there would be a great deal of work for a permanent dentist. 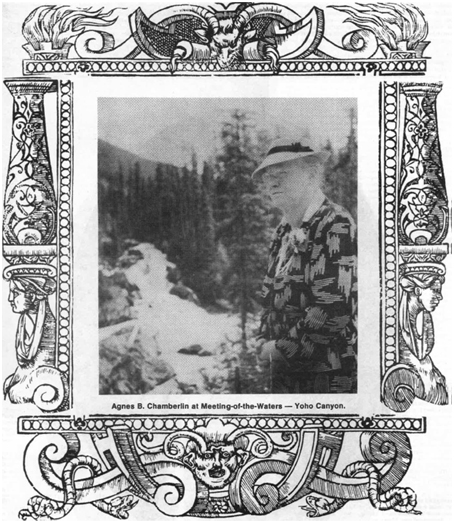 Dr. Chamberlin set up shop in an empty barber shop; a chair had been left behind. Some of the first dental work Dr. Chamberlin did in Cody was paid for not with money, but with a load of lumber.

The Chamberlins built a house on what is now Sheridan Ave. and joined the small, but growing community. Mrs. Chamberlin passed time learning to hunt rabbits with a .22 rifle while Dr. Chamberlin worked on teeth.

Housekeeping in the early days before the coming of the railroad was primitive. The Cody Trading Company, the only store in town, received goods and supplies only twice a year and when the Chamberlins arrived, the stock was low. They were unable to purchase a stove to heat the small house they had built and while Dr. Chamberlin hunted elk, Mrs. Chamberlin spent her days sitting in their covered wagon top near their camp stove. A neighbor took pity on her, found some stove pipe and soon they had a heating stove of their own, and no longer had to rely on a camp stove.

The pre-railway days were marked by a limited food supply in Cody. There was no meat market, no fresh vegetables and few fresh fruits. Eggs were unheard of and milk was a luxury. No one kept chickens and there was only one milk cow, owned by the editor of The Cody Enterprise, Colonel Peake.

Hunting provided meat and the ladies of the town gathered wild buffalo berries in an attempt to make jelly, but the work was so tedious that no one was interested in pursuing the gathering of berries.

After the coming of the railroad, things began to look up. A meat market opened and vegetables and fruits were available.

Mrs. Chamberlin had left most of her clothing behind and was awaiting the delivery of her trunk. An election campaign was going on but all Mrs. Chamberlin could do was lie awake at night, listening to the others’ voices, for she had no party clothes.

Her trunk arrived in time for a big social event, the organization of a men’s club. The Cody Club (now functioning as a chamber of commerce and business men’s group) was organized as a sportsmen’s club and the ladies of the town enjoyed the parties it provided.

Mrs. Chamberlin occupied herself in the employ of The Cody Enterprise, where she worked as a typesetter. The newspaper was owned at the time by Colonel William F. Cody and Colonel J.H. Peake.

Realizing the need for a boarding house in town, Mrs. Chamberlin started the Chamberlin Hotel. She and her husband successfully operated the hotel, noted for its good food and conversation, until her retirement in 1939. It was sold to Hattie and George Evans and renamed The Pawnee Hotel. In 2005, it was renamed The Chamberlin Hotel in her honor.

When she died, in 1949, all Cody businesses were closed during the hour of her funeral services, by proclamation of the Mayor.