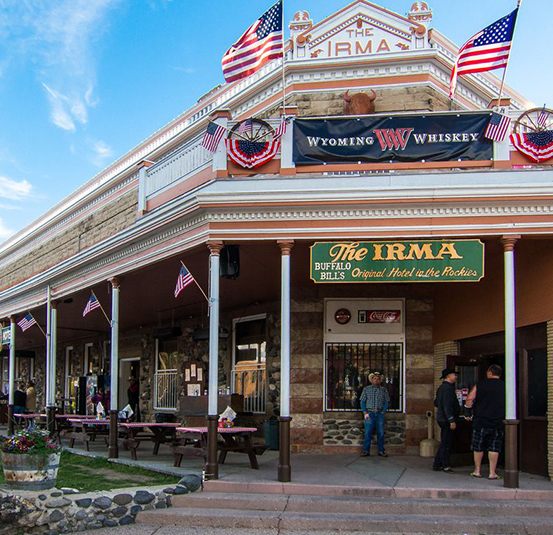 The Irma’s Place In History

Step back into the old West at The Irma Hotel a place that Buffalo Bill Cody called a “gem”. You’ll experience the romance of an era when Buffalo Bill’s Wild West Show try-outs were held on the lots west of the hotel, when buffalo ran amok in downtown Cody, and when European nobility headquartered at The Irma while on hunting treks in the area.

“Buffalo Bill”, William F. Cody, was arguably the best known American in the world during his lifetime. Having been involved in many events that shaped the American West, he formed an arena show of the western experience called Buffalo Bill’s Wild West in 1883. It toured the United States and Europe for 30 years.

Buffalo Bill helped found Cody, Wyoming, in 1895. He also established his TE Ranch in the area. In 1902, he built an establishment which he called “just the sweetest hotel that ever was” and named it for his youngest daughter, Irma. It was built to appeal to visitors from around the world — as a staging point for sightseers headed for Yellowstone, big game hunters, summers tourists, and businessmen investigating the ranching, mining, and other business opportunities. Buffalo Bill maintained two suites and an office at the hotel for his personal use.

The Irma is listed on the National Register of Historic Places by the National Park Service in recognition of its contribution to the cultural foundations of America. A copy of the application and accompanying photos are available on the National Park Service site. The hotel was designed by Alfred Wilderman Woods, a Lincoln, Nebraska church architect. Certain exterior walls are made of river rock and locally quarried sandstone from Beck Lake just south of town. The fireplace is an assemblage of rock, ores, minerals, and fossils from the Big Horn Basin.

The Irma’s famous cherrywood bar, a gift from Queen Victoria, dates to the period of construction and is one of the most photographed features in all of Cody. The original part of the hotel was built for Buffalo Bill in 1902. The northwest addition was constructed in 1929, and the southwest addition was added in 1976-1977. 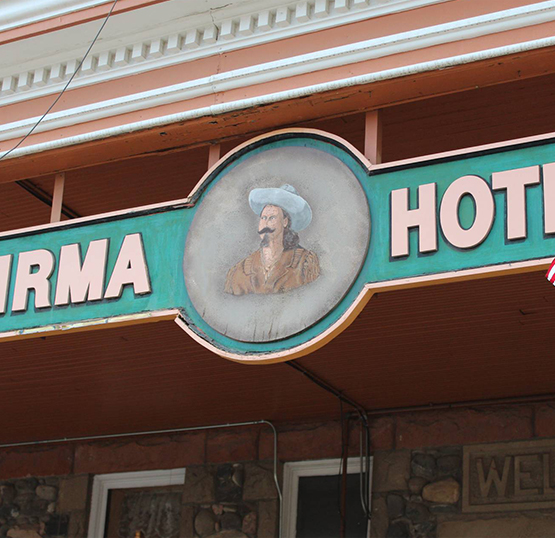 The old west remains at Buffalo Bill’s Irma Hotel. Today, you can stay in renovated rooms that housed some of the most famous personalities the world has ever known. You can even stay in Buffalo Bill’s private suite or in a host of other historic and non-historic rooms. All have modern bathrooms and air conditioning.

At The Irma, enjoy the best food in the West. We recommend our prime rib. Partake from our breakfast, lunch and dinner buffets; or order off the menu. Enjoy a drink in the Silver Saddle Lounge where you can see a show saddle that belonged to Buffalo Bill Cody. Sit on the porch where Buffalo Bill and Irma sat and enjoy the Cody Gunfighters’ show and music most summer evenings, have a “porch snack”, or just watch the sites of Cody. Or arrange for a private party in the Governor’s Room or at your own venue.

Tour the hotel and see the many old photos and wild game mounts. History lives here.

You’ll be comfortable at The Irma. It’s a place fancy enough for royalty and plain enough for cowboys and cowgirls. You’ll love Buffalo Bill’s Irma Hotel. It’s the heart of Cody, Wyoming.