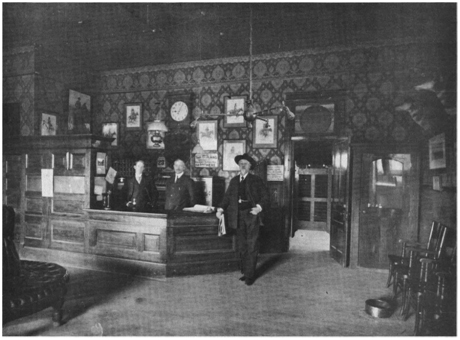 During the early days of the Irma Hotel, the lobby was entered off the porch. This area is now the Silver Saddle Lounge. Here Colonel Cody stands at the registration desk where the famous and infamous, the rich and poor, farmer and rancher, all came to visit the big city of Cody and be refreshed by its modern pleasures. 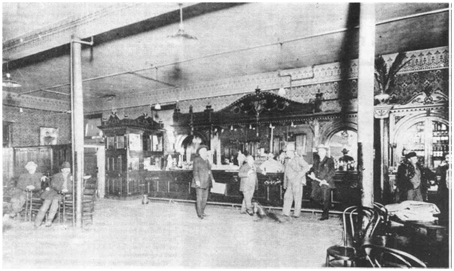 This back bar was presented to Colonel Cody in 1900 by Queen Victoria of England in appreciation for his command performance. The bar was made in France, shipped to New York by steamer, then shipped by rail to Red Lodge, Montana, then by horse drawn freight wagon to Cody. It is now valued at $100,000. The above picture was taken when the present dining room was a barroom. 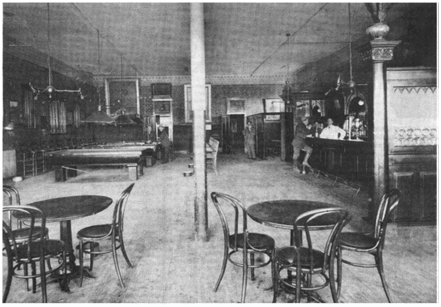 This is the way the present dining room appeared during The Irma Hotel’s early days when Buffalo Bill ran a barroom and billiards room. To the right is the cherrywood back bar just as it is now. However, the pool tables are gone to be replaced with dining tables.

The Barroom and Dining Room Today

Frank Blackburn, sheriff of Park County, Wyoming, from Jan. 1927 to Jan. 1959, began life in Higher Traumere, a suburb of Birkenhead, England, on Sept. 30, 1879. He was the youngest of the ten children of Edwin Blackburn, head draftsman of Laird Brothers Shipbuilding Co., and Margaret Clague Blackburn, from the Isle of Man.

When Frank was a schoolboy in Birkenhead, his father took him and his brothers to Buffalo Bill’s Wild West Show in Liverpool, and this was such a thrill to him he knew he wanted to see the West, and perhaps live there. Although Frank was eligible for an Oxford scholarship, he decided at the age of 15 he would like to go to sea or go to Canada to work for an uncle, a wheat rancher. His parents decided he would be allowed to go to Canada and gave him passage fare.