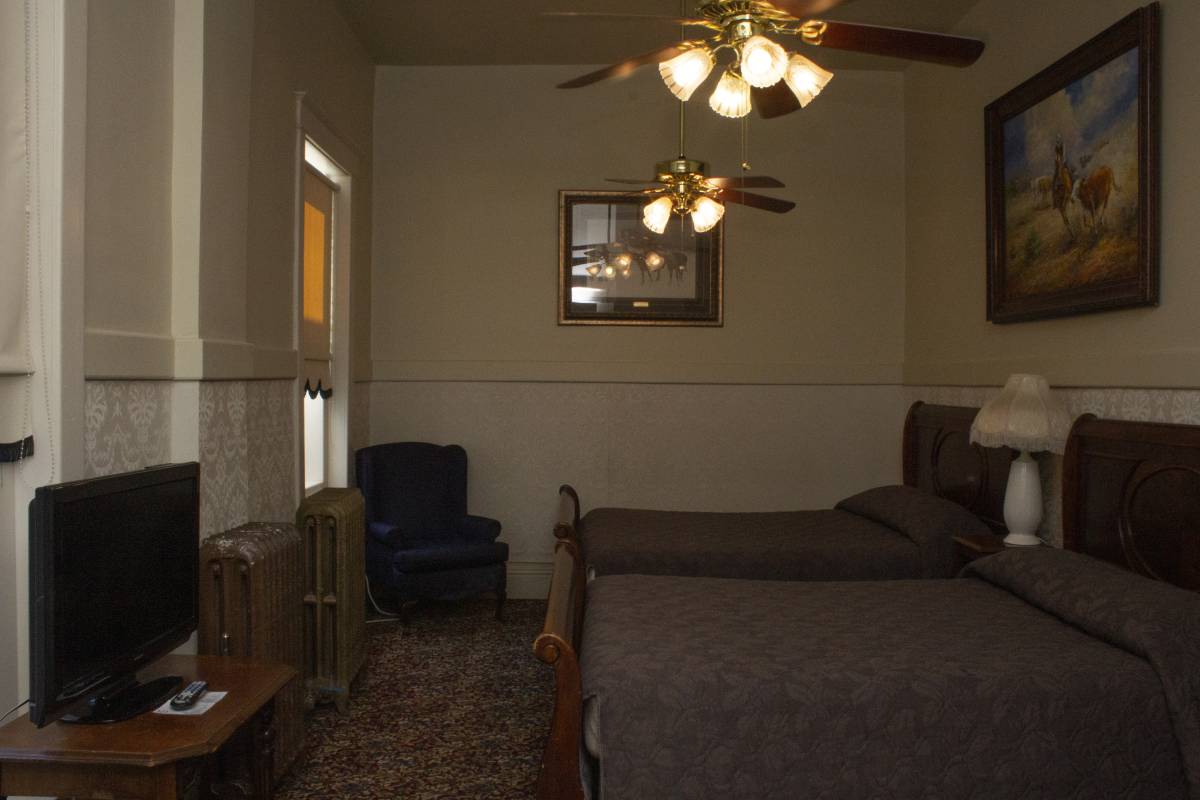 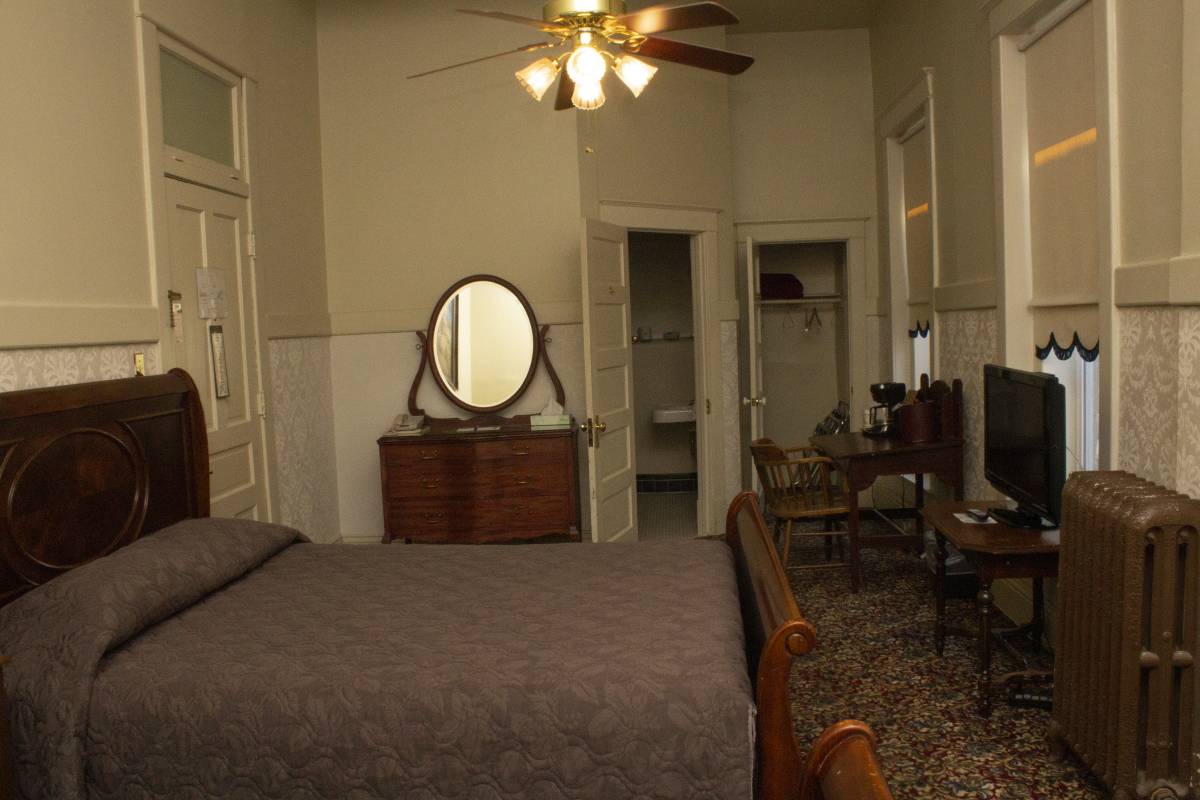 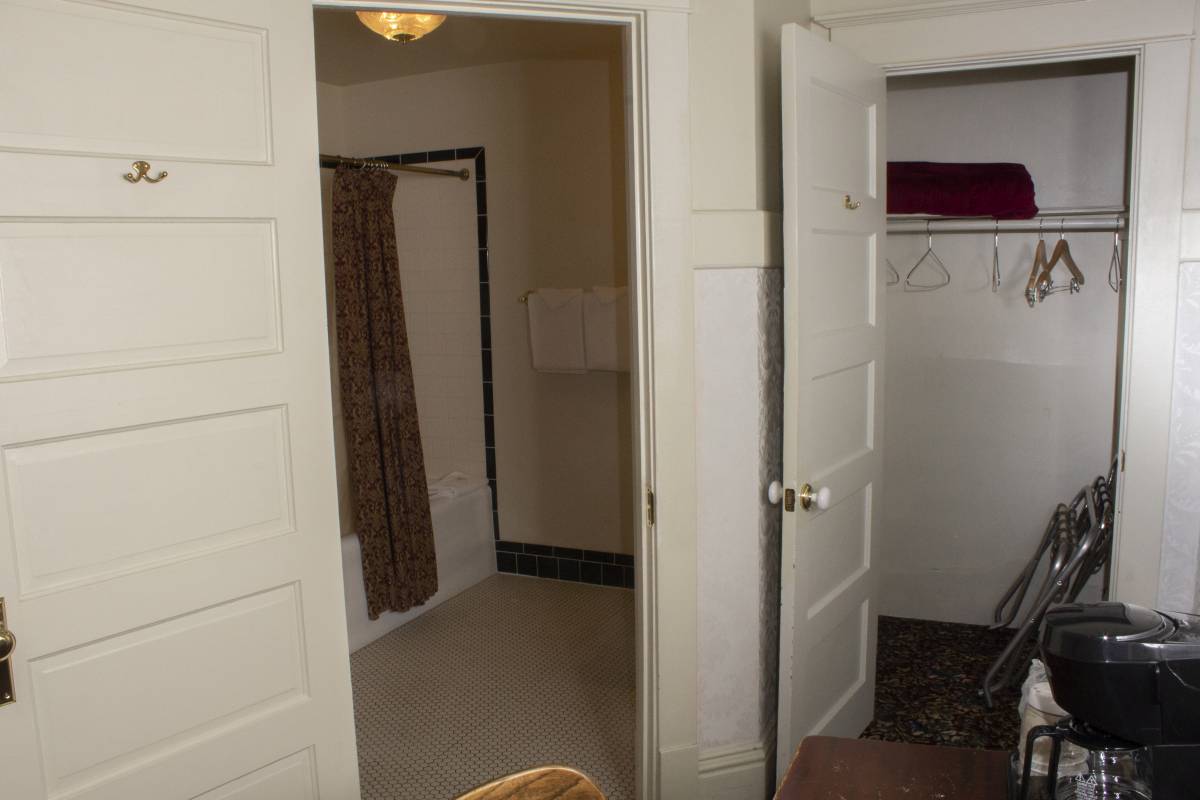 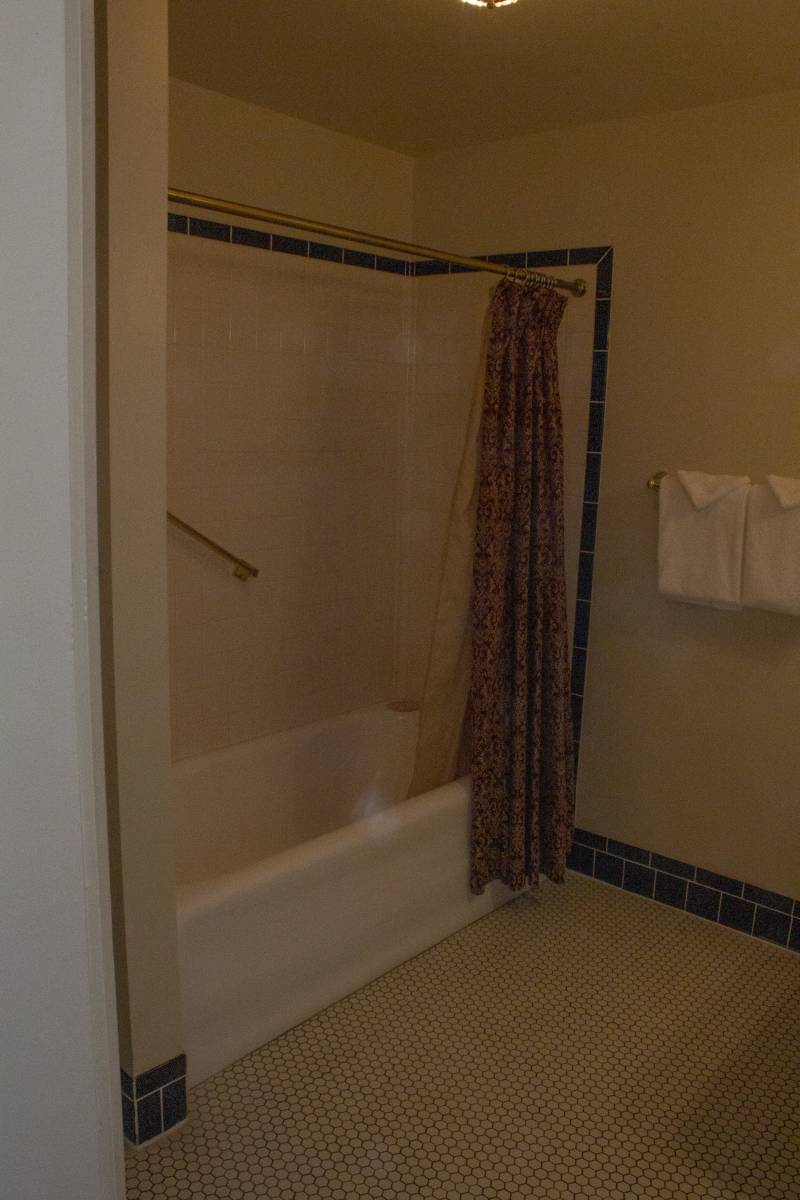 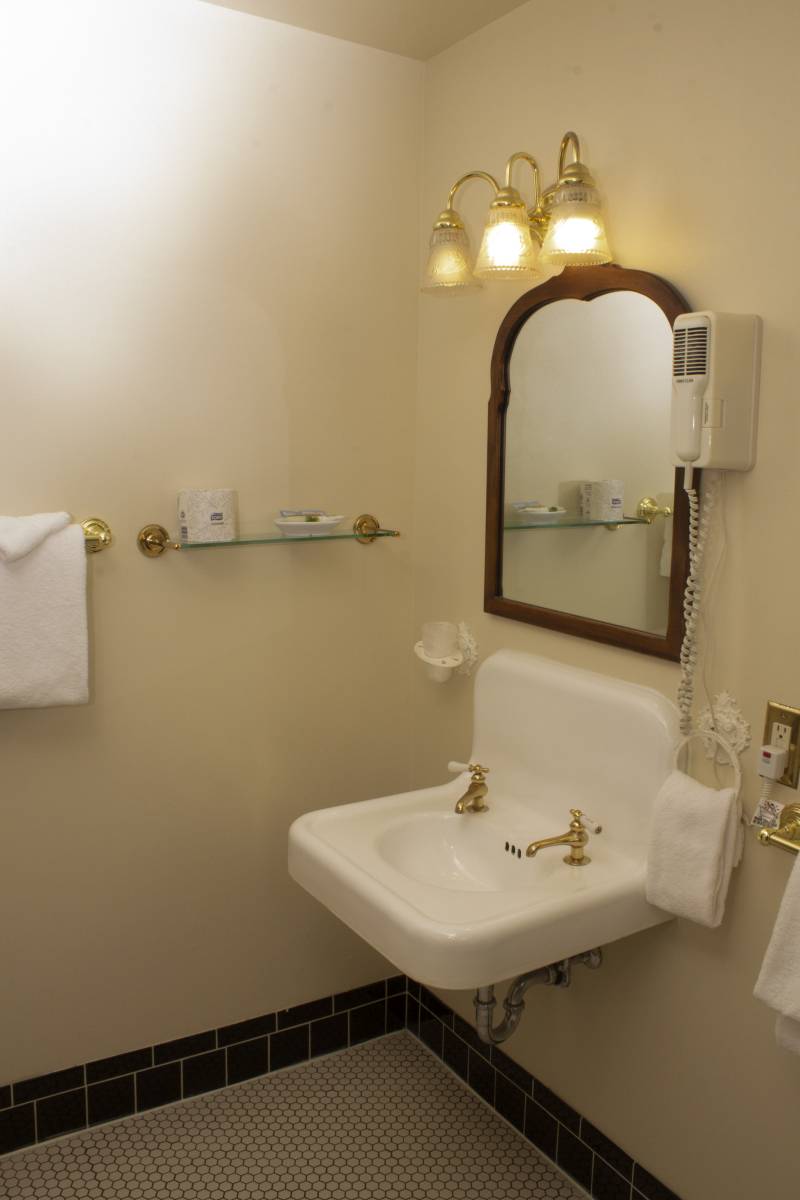 This historic suite is as named after an easterner who fell in love with the idea of the west. He ran the Cody Trading Co. from the time it opened until his death, served four terms on the Senate, and had a hand in seeing to the future of Cody and Yellowstone. This room is located on the second floor, this suite offers a full-size closet, writing desk, lavish historic furnishings, and amazing light with three windows. The suite has two queen size beds, accommodating four guests.

Dear to the hearts of the early day pioneers in these parts was Jacob McComb Schwoob. The Jakie Schwoob room of the Irma Hotel was named in honor of this outstanding and memorable personage.

Jakie Schwoob was born July 8, 1874 in Wellingport Ontario, the son of William H. and Elizabeth Steward Schwoob. He came to the U.S. at the age of 18 to work for George Bleistein as manager of the Iroquois Hotel in Buffalo, New York. About this time Buffalo Bill had become interested in this area and had been soliciting interest from his wealthy friends to invest in its development.

Among these friends was George Bleistein, owner of the Iroquois Hotel in Buffalo and H.M. (Monte) Gerrans of the Courier Printing Co., also of Buffalo. In 1894 they came to this area, sometimes warmly referred to as “the land of the stinking water,” along with Buffalo Bill and several other investors to take a look.

The prospects looked good and that same year they each raised $5,000 and formed the Shoshone Land and Irrigation Co. Soon plans were laid to build a canal and to make the arid sod bloom like a rose. In 1897 the canal was completed and by 1898 the eastern directors of the project saw the need for a larger commissary.

Their friend Jakie Schwoob, manager of the Iroquois Hotel back in Buffalo was just the man they needed. In 1898 Schwoob moved to Cody and opened the much-needed Cody Canal Commissary. A new building was built and it became known as The Cody Trading Co.

Jakie Schwoob immediately liked the rough little pioneer town and soon became an enthusiastic participant in its growth and well-being. Never one to keep a good thing to himself, he encouraged many people to come to this beautiful country. He was soon joined by his three brothers: Walter, Lorne, and Hayward, who became blacksmiths and sheep wagon builders.

The first baby to be born after Cody was incorporated in 1901 was Thornton W. Schwoob, son of Jakie and Louisa Schwoob. He was named after their good friend George Thornton Beck, one of the group’s fellow town founders.

In 1901 an effort was made to start a town band in order to spice things up a bit. Buffalo Bill generously offered to donate all the musical instruments and uniforms. Jakie was such an enthusiastic town booster and was so delighted by the lure of cowboy style uniforms that he joined, in spite of the fact that he couldn’t play an instrument. He was happy to fill a uniform and march in the parades.

As manager of the Cody Trading Co., Schwoob soon won a place in the hearts of the farmers and ranchers. He made friends with everyone and sold reliable merchandise. He soon became known near and far as “the merchant prince of the Big Horn Basin.” You could buy anything you’d ever want in the Cody Trading Co.; groceries, hardware, clothing, household goods, and farm or ranch equipment.

Jakie trusted and helped everyone he could. He never pressured anyone who was having hard luck and he always did business on a personal basis. If someone had a long overdue bill, Jakie would go talk to them and if they were selling something, he’d suggest that they give it to him in payment for the account. He kept the store open for the convenience of the townspeople. He might be in the middle of a dinner party but if someone needed something, he would excuse himself to go and serve the customers.

Jakie Schwoob was always civic minded and in the interest of the town he loved, he ran for the state senate in 1905 and won. He served four terms from 1905-1913. For his outstanding leadership in state government he was awarded license number 1-1, an honor given to the man considered number one in the state of Wyoming. He held that distinctive license number until his death in 1932.

Schwoob was a man of foresight. Most people saw the new “horseless carriages” as some kind of impractical toy but he could see the day when automobile travel would do for this remote area as much as the Cody Canal had. He initiated legislation to establish the first state highway because he saw in the future a necessity for auto roads and the benefits that modem tourist travel could bring.

Many old-timers remember that Jakie Schwoob owned the first automobile in Cody. He would drive around town and good-natured as he was, would give all the kids a ride and often take them to school on cold winter days. He holds the honor of owning and driving the first automobile into Yellowstone Park as well as into the Sunlight Basin.

Being both a Cody booster and a road booster, Jakie Schwoob was involved in the first “Pathfinder Tour” from Chicago to Cody. He also served as Mayor of Cody and town councilman and was constantly active in civic affairs.

Schwoob was married to Mabel Laird Bulger in 1926 and ran the ever-growing Cody Trading Co. until his death on Dec. 17, 1932.

There is always plenty to be said about the dashing devil-may-care, old west cowboys but never enough in behalf of the hardworking men of foresight who were the backbone of quality growth. Jakie Schwoob was one of those men to whom we owe thanks, not for glamorous gun battles but rather for stable and sound community life. 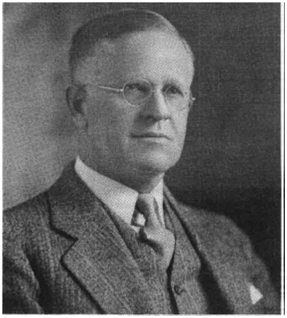 Jacob Schwoob sold reliable merchandise of all kinds through his Cody Trading Company and was known for his consideration in serving his customers and in collecting overdue accounts. He would leave a dinner party to serve his customers, if necessary. 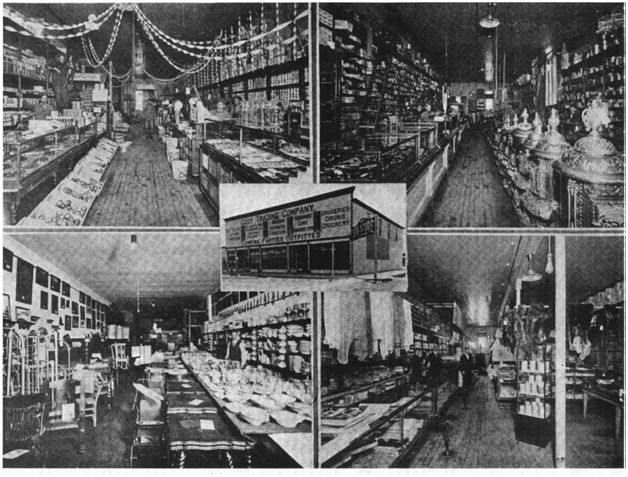 A.G. Lucier put together a 36-page booklet entitled “Pictorial Souvenir of Cody, Wyoming.” Cody was described as the “scenic entrance to Yellowstone National Park” and the book carried pictures of Cody businesses and buildings. The story began, “Cody, the county seat of Park County, is a thriving little city located in the northwestern part of Wyoming, on a level bench above the banks of the Shoshone River, with a romantic background of rugged mountains” and ended, “Any person wishing to better his worldly condition or searching for health and recreation, should not fail to visit Cody and investigate the town and surrounding country. Inquiries addressed to the Secretary of the Cody Club will receive prompt and courteous reply.”