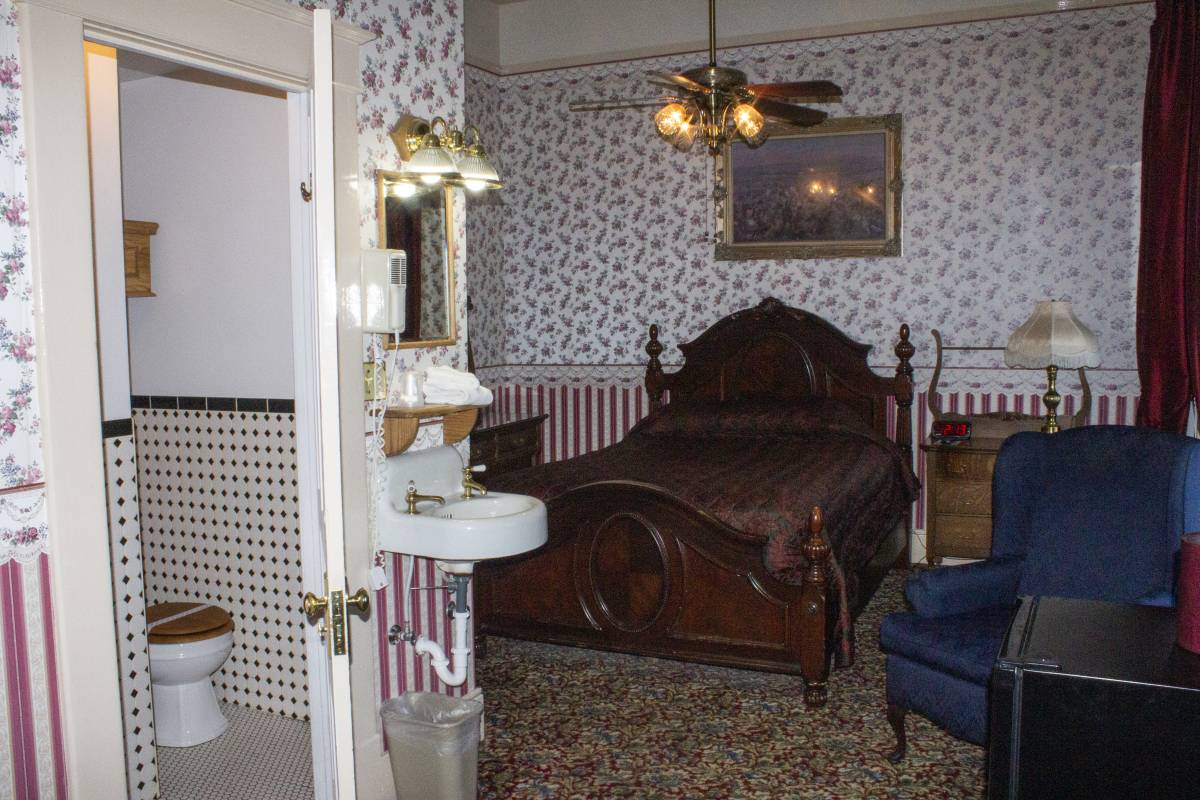 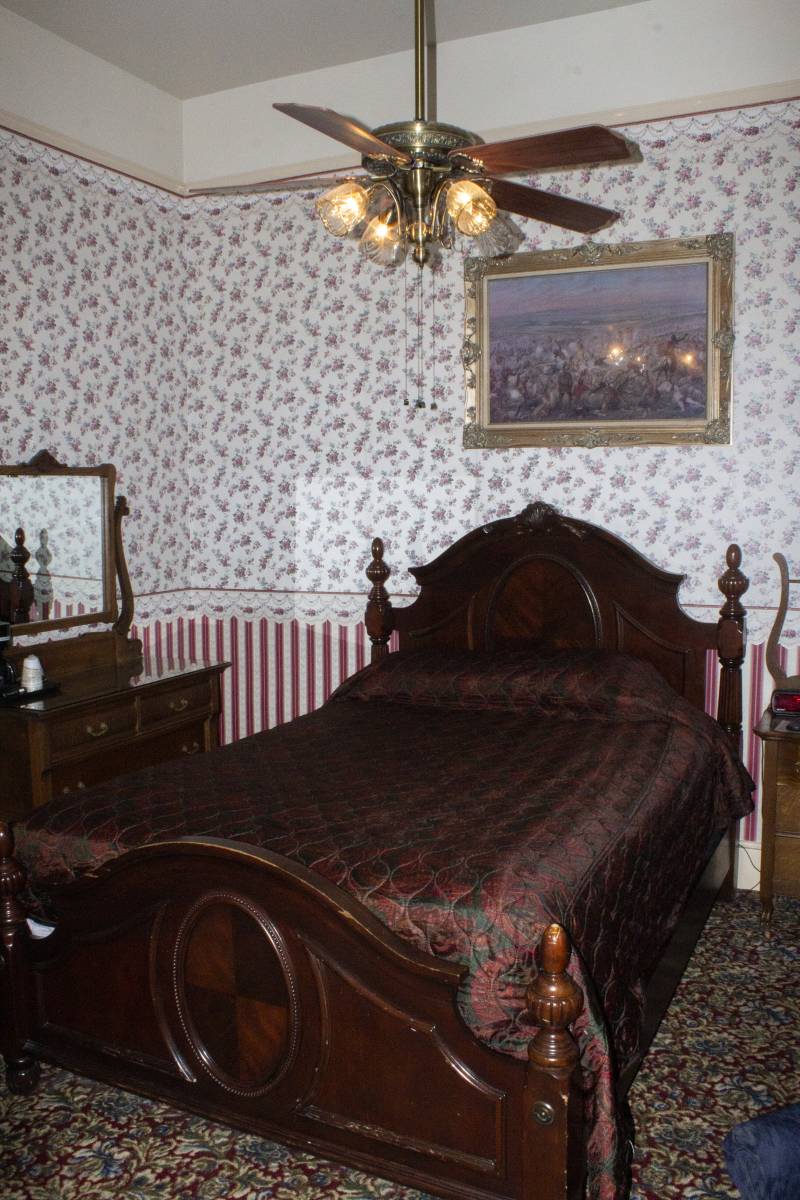 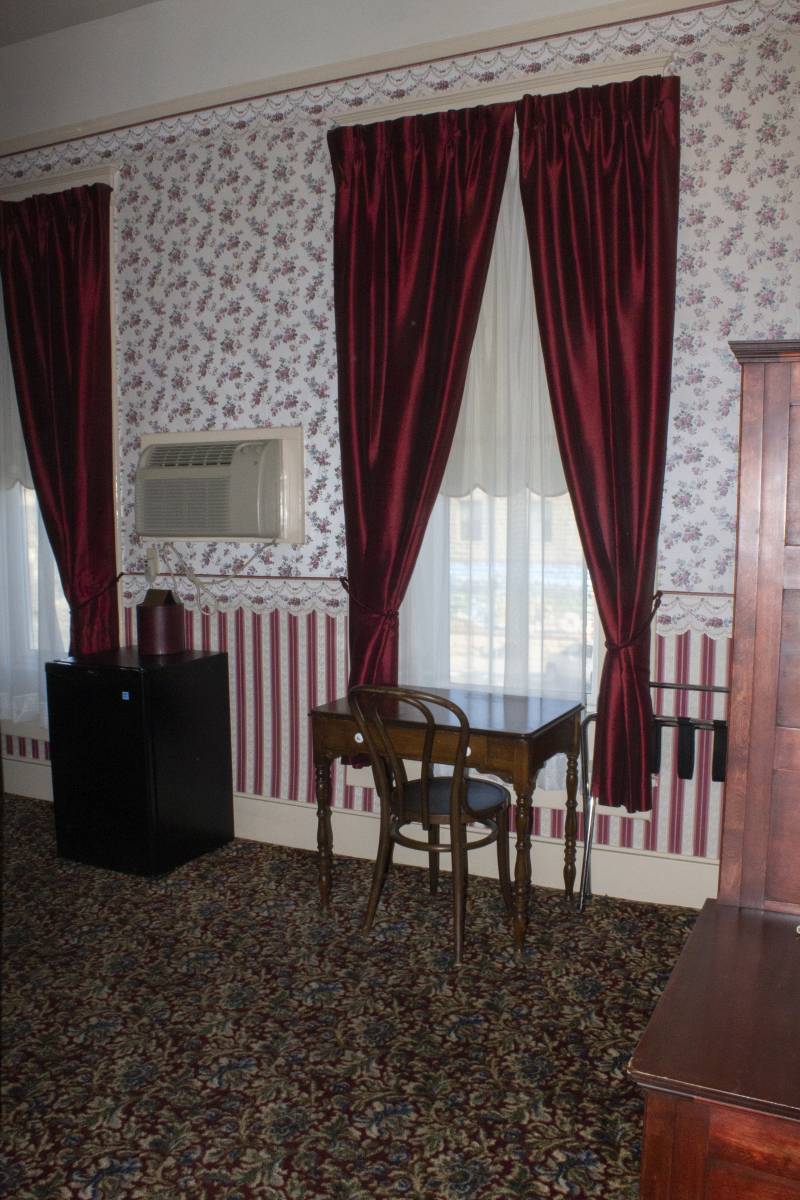 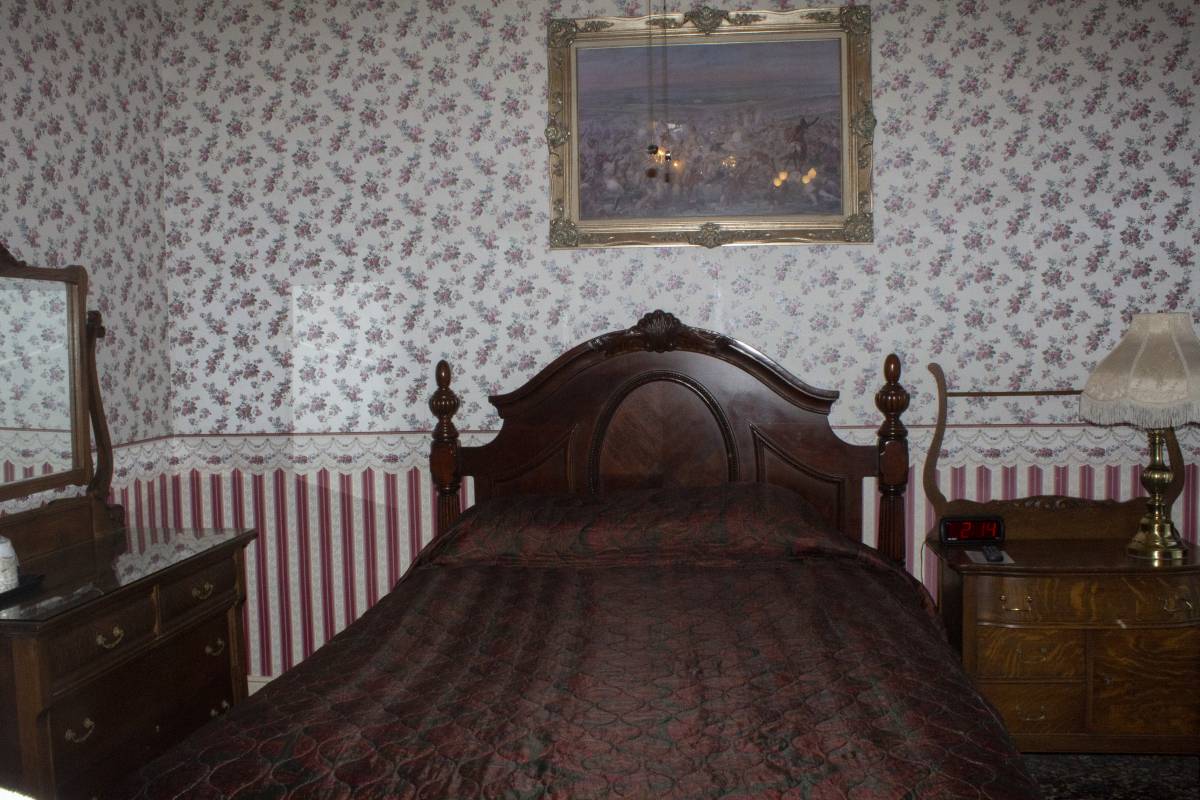 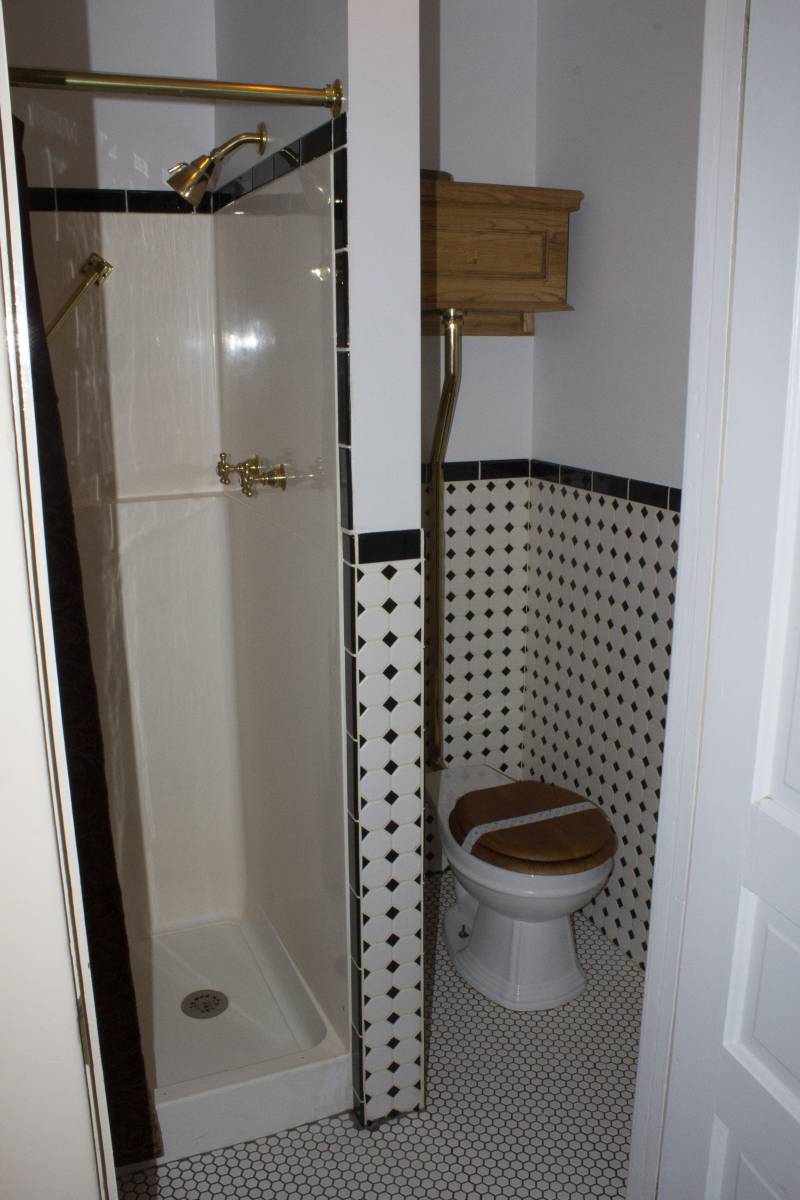 This historic suite is as named after the great mountain man who guided celebrities like Ernest Hemingway and President Herbert Hoover through the backcountry of Yellowstone. He survived bear attacks, broken bones and become one of the last great frontiersmen of his time. This room is located on the second floor, this suite offers a semi private bedroom, lavish historic furnishings, a stand-up shower, and beautiful views of downtown Cody.The suite has a queen size bed, accommodating two guests.

Mountain Man of the Rockies

There are many stories of the great mountain men who roamed the Rocky Mountains back in the early days. Vern Spencer of Cody, Wyoming, was one of the last of this rugged breed of men. The Vern Spencer Room of the Irma Hotel is named after this very special man.

Spencer was born in Telluride, Colorado on April 5, 1899. Vern got an early start at the rugged life. “My mother said she started feeling funny and she hollered at someone going past (it was in a mining camp), and all of a sudden there I was!” There weren’t any proper doctors at the rarefied elevation of 10,000 ft.

Truly an original Codyite, Vern Spencer came here at the age of three when Cody was mostly sagebrush and rattlesnakes. The year was 1902. Buffalo Bill was in the process of building the Irma Hotel and Vern’s father was hired to come and do the interior decorating.

I.C. Spencer loved the country around here so much that he soon went out of the interior decorating business and purchased a dude ranch up on the Southfork. At 12-years old, Vern was wrangling and guiding at “Spencer Wigwam,” as they named it. His dad used to say Vern was “born in a grizzly bear track.”

Vern’s father had taught him rifle marksmanship, and he recalls that his happiest day was when he was 13 and Colonel (Buffalo Bill) Cody came looking for him saying, ”I’m looking to hire that sharpshooting kid.” Vern went to work for him and stayed with him all the time until the Colonel died in 1917. His friendship with Buffalo Bill was fondly recalled, “The Colonel was so gosh darn good to me, he was awful big hearted.”

Vern treasured the rifle the famous showman gave him as a boy. In the fall of 1916, eight men and 17-year-old Vern Spencer gathered on top of rugged Cedar Mountain near Cody. It was there that Buffalo Bill Cody, leader of the party, chose the spot on which he wished to be buried, near the town he loved and the country he loved. Cody died in Denver the following year, and was buried near there, far from the mountain and town that he loved. In 1915 Yellowstone Park was opened officially for automobiles. Vern had a Model T Ford and was in the first caravan of cars to go through. He recalled that the only way he could get that car over Sylvan Pass was to back it up in reverse.

When he was 16, Vern borrowed $1,000 and opened his own taxidermy business, although preparing trophies for dudes was just something to do during the off season. Vern was a real mountain man and his real love was the mountains and outdoor life. In the early days he would run the taxidermy shop in the summer and trap furs all winter in the wilderness areas of the Thorofare, Yellowstone, and the Absaroka Range. He once said, ‘I don’t mind the cold. I’ve put in a lot of winters back in the mountains and I like the winters.”

After World War I, Spencer went into the dude wrangling business but continued trapping during the winter. “I’d go away to Blacktail, 100 miles from nowhere, and trap all winter and then I’d be out steady in the spring, summer and fall with my pack trips. We didn’t have these overnight trips like they’ve got now. Thirty days was the shortest trip I ever took out.”

Vern Spencer had what you might call a superstar clientele when he was in the dude business. One friend was the late Gary Cooper, who lived in Cody for two years. “Coop,” as he was called, was a “gear jammer,” operating a bus in Yellowstone Park. He lived with Vern in 1921 and 1922.

Ernest Hemingway was another one of the many greats who valued Spencer’s friendship and knowledge of the mountains. Vern first met the famous novelist while hunting on the Clark’s Fork River. He guided for him several times during the thirties, always remembering to pack plenty of crabmeat, Hemingway’s favorite. Hemingway was a memorable character even on a dude trip. “He was witty,” Spencer recalled. “I got a kick out of hearing him talk.”

Herbert Hoover came out several times and Vern guided him out on fishing trips. The Wrigley family of Chicago and Marshall Field were also frequent guests. The Metro Goldwyn Mayer executives enjoyed Spencer’s trips, and he often took out stars such as Spencer Tracy, Clark Gable, Carole Lombard and Wallace Berry. A favorite of Vern’s was Gen. Robert E. Wood, who was in charge of all commissaries overseas in World War I and who was later a top business executive.

Spencer was a lifelong friend of the late Caroline Lockhart. “We were neighbors for 60 years,” he recalled. Miss Lockhart enjoyed such unlikely pets as wildcats, bear cubs, eagles and snakes. Spencer remembered scouting around for such pets and bringing them to her. “Yup, she was quite a character!” he recalled. Her home and personal property were willed to Spencer at her death in 1962.

After Vern’s dudes would depart in the fall and the winter cold started to set in, he would head for the wilderness areas, through snow 10 to 20 feet deep, to trap for furs until the following March. Like all mountain men, Vern Spencer has had a number of close calls in the wilderness. Once a wounded grizzly turned on him, slashing his chest. Fighting for his life, Vern grabbed his rifle and pumped shot after shot into the 1,100 lb. monster. At last when he was pinned against a tree, Vern fired point blank into the grizzly’ s head and he dropped dead right on top of the hunter. Vern wound up with four broken ribs and numerous bruises and lacerations.

Another time Vern broke his ankle while hunting on the 15,000 ft. high Ishawooa Mesa. The area was too rough for a saddle horse so he used two rifles as crutches and spent all that day and the next night getting down to a ranch.

Once, while being interviewed at the age of 73 he could recall hundreds of priceless stories about Cody and its many colorful early day characters. Spencer’s life spanned the development and metamorphosis of the roaring old west, from the horse and buggy days to the Apollo moon landing. He was contented and happy, having seen and done it all with the “best of ’em.” Spencer was one of the last of the great frontiersmen.