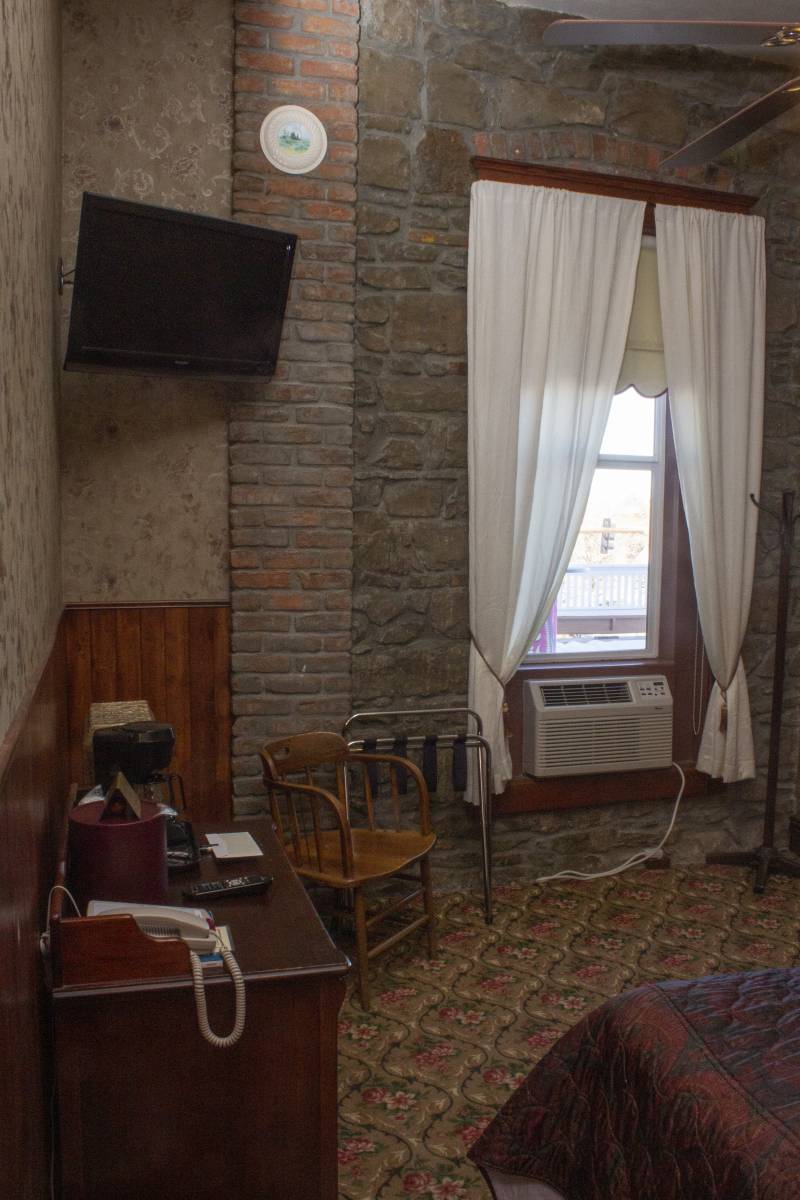 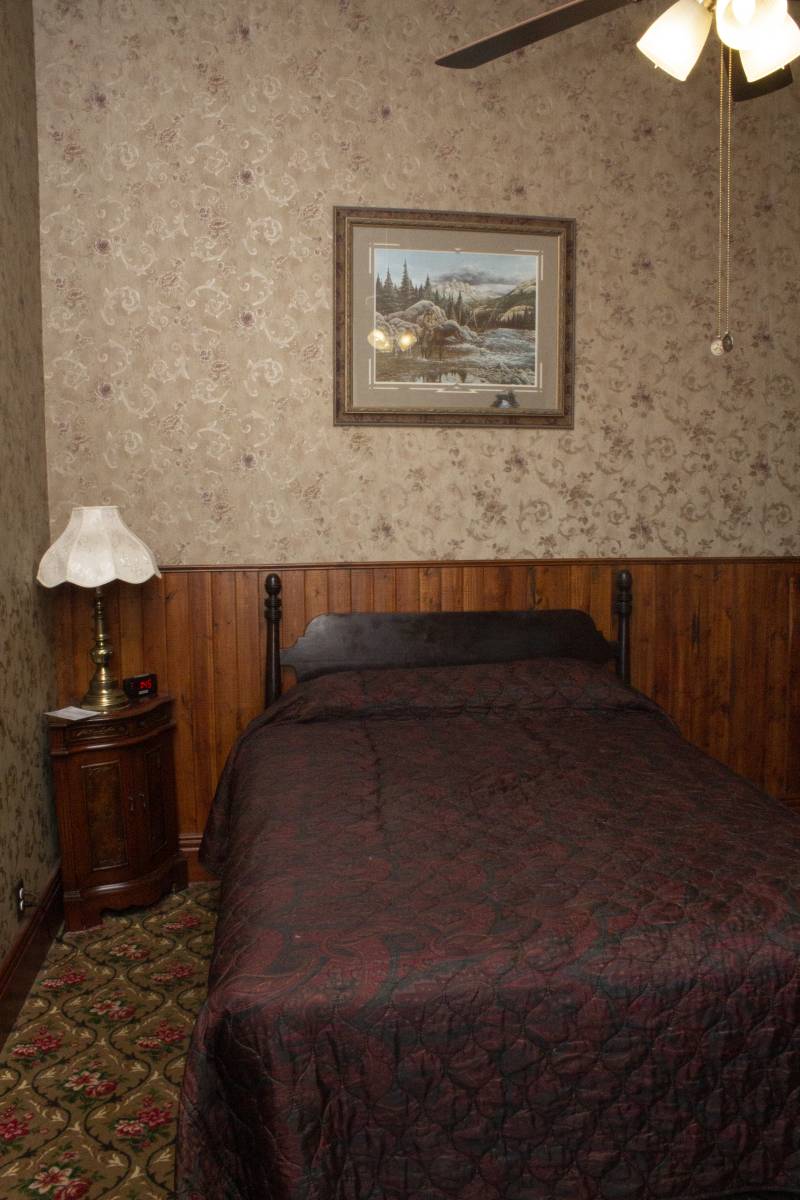 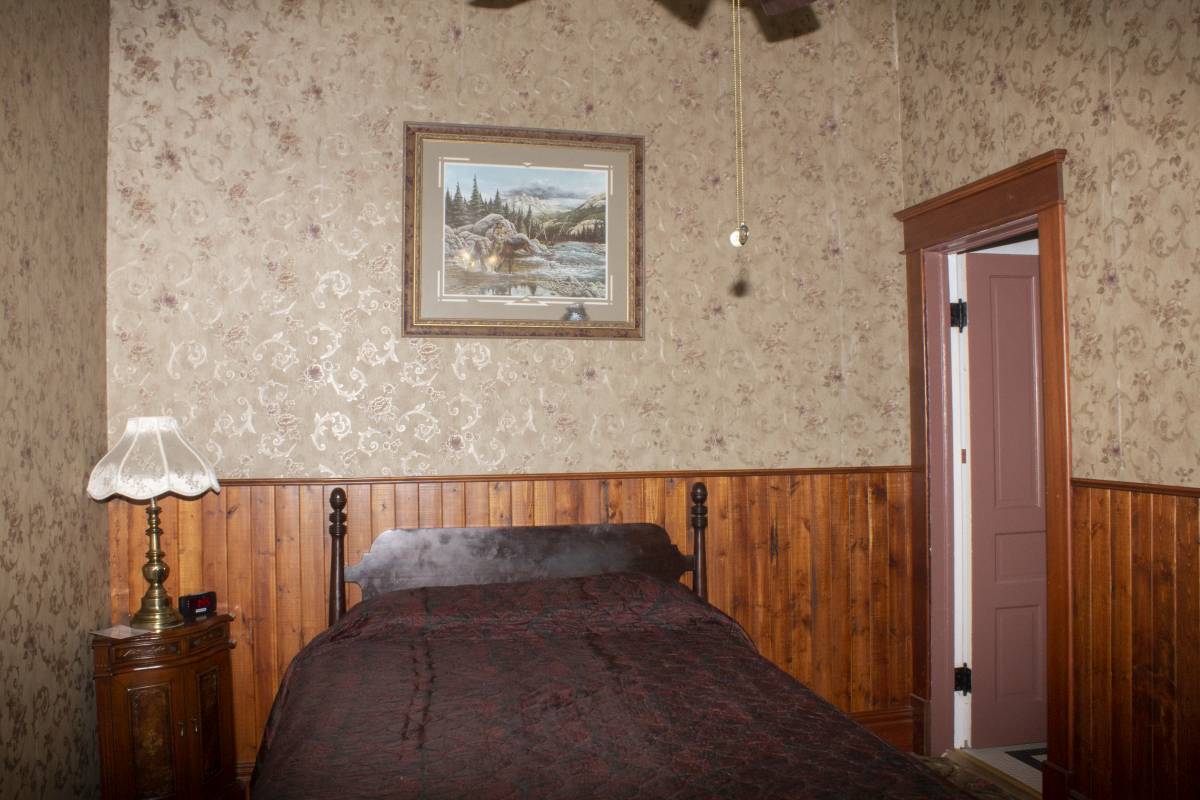 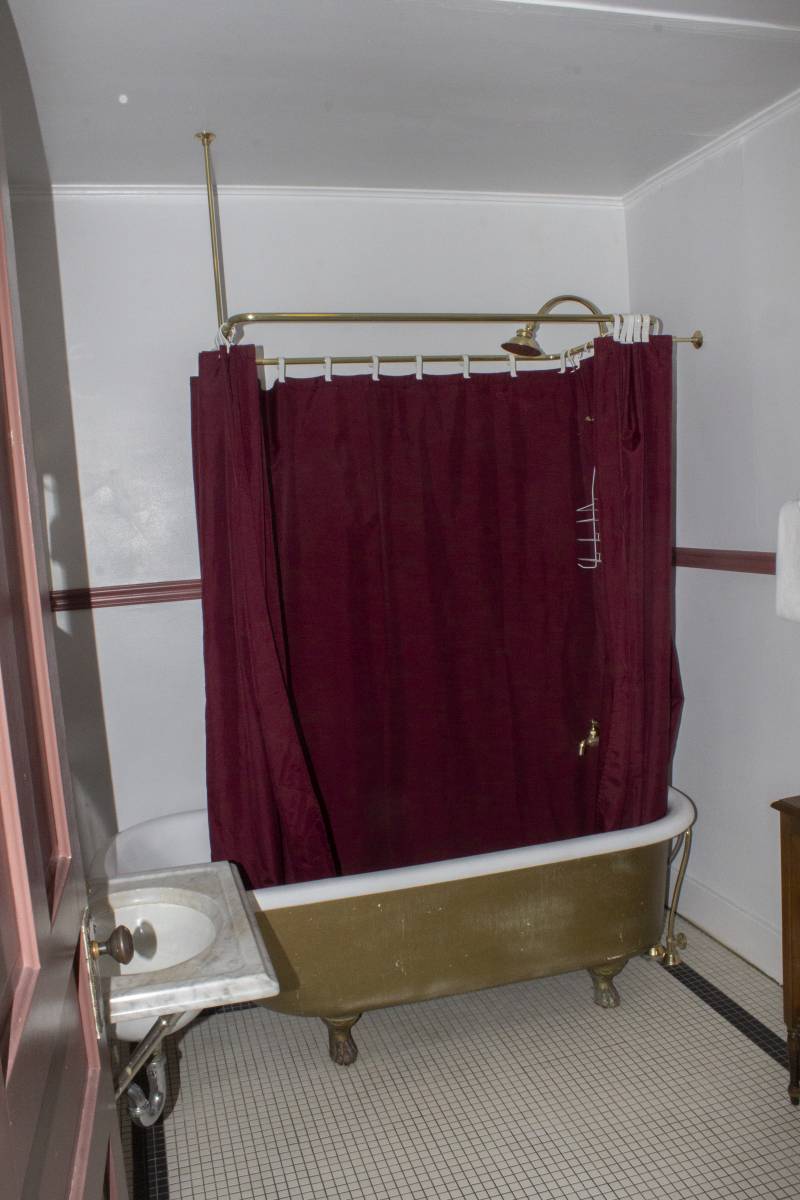 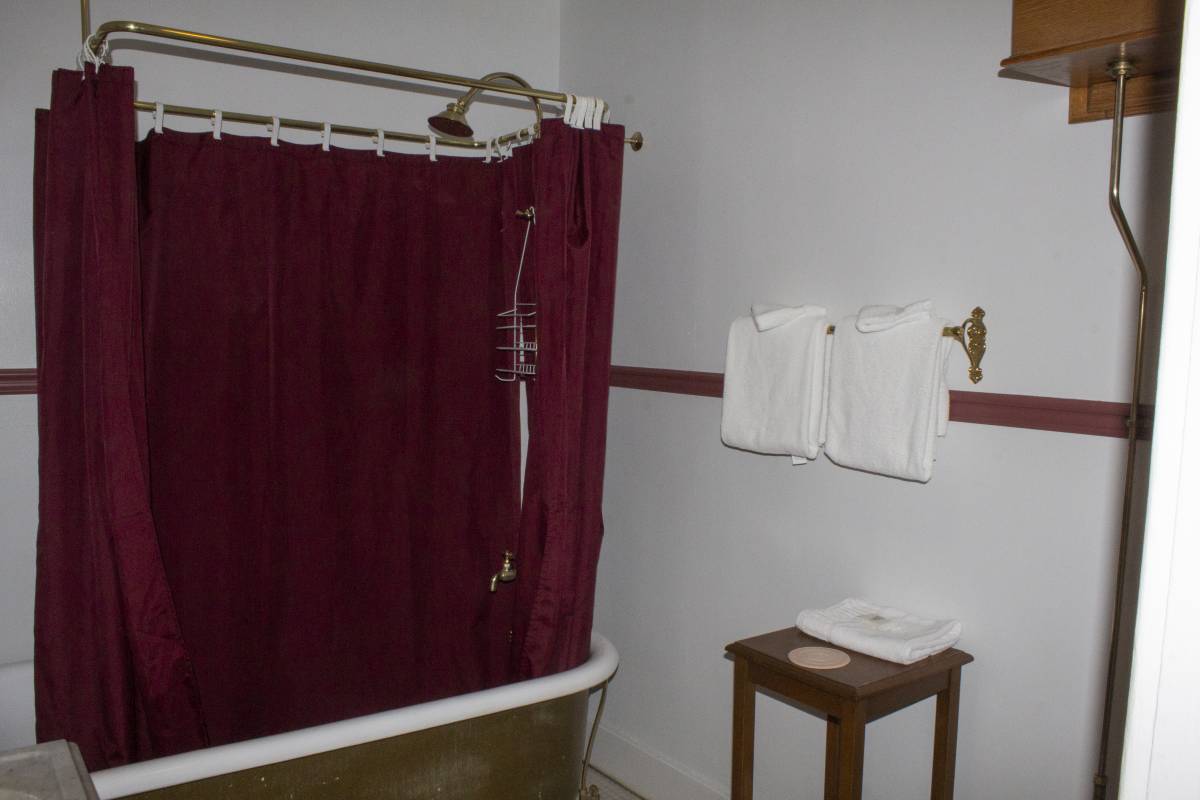 This historic suite is as named after the great mountain man and rancher himself, who lead great men such as Theodore Roosevelt on big game hunts in and around Yellowstone National Park. This room is located on the second floor overlooking downtown Cody.This suite offers a clawfoot tub, historic furnishings, original exposed brick, and a queen size bed accommodating two guests.

Ned W. Frost was born in a farmhouse near Albert Lea, Minnesota on April 11, 1889 to Malhon and Nancy Ward Frost. Malhon Frost served under William Tecumseh Sherman in Civil War campaigns. After the war, he exercised his veteran’s right to preempt a quarter section of Minnesota’s virgin prairie lands. At the time of Ned’s birth, Nancy and he were already raising a lot of older children than Ned. These were Emma, about 16; Jesse, a boy of 14, and Daisy, then 9 years old.

Despite two decades of not unsuccessful efforts in developing a farm, Malhon Frost, in 1883, determined to leave it and follow the line of the building Northern Pacific Railroad to find a new home on the western frontier.

He assembled quite a caravan – a heavy covered wagon drawn by four fine draft horses; a lighter wagon pulled by a span of coach horses; and two small herds of foundation stock, cattle and horses – to make this westward migration.

The family sojourned through a long winter, in North Dakota, where the oldest daughter was married and remained, and then came on in 1884 to the new town of Billings, Montana. There Malhon learned about opportunities for new ranching enterprises to the south, in the Bighorn Basin country and particularly in the valleys of the Stinking Water River (now Shoshone).

Coming through Pryor Gap into the Bighorn Basin, the Frost entourage had with them a party of 30 or 40 Crow hunters under Chief Plenty Coups. It developed that the Crows were making their annual fall hunt to the upper elevations of the Bighorn Mountains in quest of elk and whatever bison might yet survive in those isolated heights. The Crows were short of good rifles and ammunition, items which Malhon Frost held in good supply. Plenty Coups prevailed on the emigrant family to accompany his hunting party and it was thus that both the middle-age Malhon and his infant son made a lasting friendship with the remarkable Crow Chief; receiving at the same time an indoctrination into mountain men ways of life.

The Crow hunt lasted almost a month so that it was well along in the fall before the Frosts went into winter quarters near the very end of possible wagon travel on the upper South Fork of the Stinking Water. Those quarters were across the river from where the Valley Ranch and Post Office was later established and actually made use of ground that is now a part of the A2Z Ranch. But in that winter of 1884-85 their only close neighbors were two or three lodges of Shoshone Indians.

In the spring of 1885 Malhon Frost was approached by an agent of the Red Lodge – Fort Washakie – Green River City (county seat of Sweetwater County, then extending the breadth of the state – from Colorado to Montana) Stage Line. The proposition was for Frost to establish a stage station roadhouse ranch where relay teams would be stabled and where passengers could stop for a meal or if they desired an indefinite layover. Frost agreed. But first, he said, he and his family would tour Yellowstone Park.

The family outfitted for this trip in their covered wagon taking, besides its four-horse team, three or four saddle horses and a milk cow. Nancy Frost kept a diary of that outing.

The only feasible route was over Dead Indian Hill and she described vividly the chaining of a large, heavily branched pine tree to the rear of the wagon in order to brake the vehicle during the steepest part of the miles-long descent.

The sightseers continued up the Clarks Fork to Cooke City then followed the, already some years old, mining road to its junction at Mammoth, park headquarters (then called Fort Yellowstone), with the new and still building system of park tourist roads.

Thus, Ned Frost, a boy of 5, received his introduction to Yellowstone National Park and the mountain wilderness country in which he was destined to become a noted guide and protector.

Malhon Frost came back from the park to the foothills of the mountains to establish his stage line-roadhouse ranch on Sage Creek about 15 miles south of the Stinking Water River. This is where the town of Cody would be founded a dozen years later.

He chose the reverse F for his brand but unlike many frontier ranches his place was not known by the brand name, it was always just the Frost Ranch. So, it is still called today, although Malhon sold the place in 1906 and no descendant of his has lived there since.

Quickly the roadhouse operation proved a success. The wilderness around Yellowstone National Park was then attracting world-wide scientific and recreational (especially, big game hunting) interests, and no part of it greater interest than the Stinking Water and Greybull drainages leading out of the Shoshone Mountains (later named Absarokas after the Crow tribe).

Many people – writers, scientists, artists, sportsmen – traveled to Red Lodge, Ft. Washakie, Green River City Stage line and stopped for a sojourn at the Frost Ranch to investigate particular aspects of the countryside. So, Ned, a growing boy, not overly exposed to formal education, received a rich education in social relationships. He also got an education as a hunter, being made responsible at about the age of 12 (his own reminiscences always varied the age from 8 to 10) to provide antelope and deer meat for an always expansive table.

In this connection he had an amusing tale regarding the projectile velocity of black powder loads compared to the quickness of antelope. Naturally when it took a deer or antelope or two per week to keep the table supplied, deer and antelope living in the immediate vicinity became pretty wise. Ned liked to tell of the antelope that would stand, gazing at the hunters from 3 or 4 hundred yards; when the tell-tale black smoke would burst from the rifle muzzle the antelope knew it was time to make a side-way leap. According to Ned, it was possible to kill one; only if the hunter guessed correctly in which direction the animal would jump, otherwise he “missed by a mile.”

One day Ned was hunting near their neighbor’s ranch, the Ferguson Ranch three miles up Sage Creek. He tarried to watch a horse breaker working colts in the corral. A man came off the Meeteetse Rim riding a jaded horse and leading an equally weary pack animal. The man rode up to the corral and without preliminary salutation, flatly stated the need for fresh horses. The horse breaker surely recognized this man for he silently drove in fresh saddle stock from the horse pasture – only commenting as he corralled the animals that they were all unshod. But the man replied that there was no time for shoeing; he made a rapid exchange of gear and pack, swung into his saddle and headed for the upper Stinking Water country.

Shortly after, the sheriff from Lander (county seat of new Fremont county) rode up with his posse. Better mounted on shod horses they continued the pursuit, and the next night on the headquarters of the South Fork of Stinking Water caught up with Jack Bliss, notorious horse thief. Bliss had set up camp, evidently out of consideration for sore footed horses but also probably thinking he had outdistanced the pursuit. They killed him over his campfire and took his picket horse – but missed the second one which had grazed into the timber.

A sequel to the story was that the second horse, despite deep mountain snows, managed to survive the winter by browsing willows on what is now named the Bliss Creek Meadows. The next fall Malhon, Frost, Billy Whitworth and young Ned, out on an early hunting trip, found the horse and returned it to the Ferguson Ranch.

On a frontier where schools had not yet made much of a showing, it was Nancy Frost who made certain her son Ned had more than a nodding acquaintance with reading, writing and arithmetic; and she even sent him to relatives in Indiana for one six-month course of study.

But in the school of the great outdoors, he earned the equivalent of a post graduate degree under the tutorship of Billy Whitworth.

Uncle Billy Whitworth, as he was always called by Ned, had shown up at the Frost Ranch shortly after its establishment and he was always around handy to help Malhon in meeting the requests of various frontier visitors who arrived via stagecoach.

Whitworth was a living vestige of the Mountain Man Fur Trade history. Ned always claimed, and there is no known reason it could not be true, that Whitworth was the unknown trapper who wreaked such havoc on Red Cloud’ s warriors during the famous Wagon Box Fight of August 2, 1867.

Probably during the 1850s, Whitworth had spent considerable time in company with the noted frontiersman Jim Baker. Baker in his turn, starting in 1838, had learned his trade under tutelage of the most famous Mountain Man of them all, James Bridger.

So, Ned, who became quite a buff on Mountain Men history. He always found pleasure in stating that he learned his mountain lore from Whitworth, who learned from Baker, who learned from the acknowledged master of the discipline – Bridger.

A side light on the Baker-Whitworth association, interesting from the geographic viewpoint, is that they trapped together one winter, probably during the 1850 decade, on the North Fork of the Stinking Water. They set their base camp on the river nearly where the highway bridge at Wapiti now stands. They named the creek below this camp, coming into the river from the north, Jim Creek after Baker; and they named the creek above the camp, where the Wapiti school house is now located, Whit creek after Whitworth.

Ned Frost, a hundred years later, used to point out those two creeks and explain their naming. But now, few people – even those living along those stream courses – know the reason for their names.

The fact that Ned Frost went on to become a celebrated mountain man himself, is not surprising. In that field of endeavor, he guided eminent people and packhorse trips and big game hunts. He played a part in the conservation movement established and led by Theodore Roosevelt; he was rewarded by sheep herders for controlling the numbers of marauding coyotes. Another marauder, this one a grizzly, woke him from slumber in his camp bed on the Yellowstone, mauled him, tore his legs from thigh to knee but didn’t kill him. He went on to win note for his photographs – still shots and motion pictures – of wildlife. He advised artists and journalists; he lectured in New York at the American Museum of Natural History; his activities were mentioned in metropolitan newspapers, sportsmen’s magazines and The Saturday Evening Post; he ranched on the North Fork of the Shoshone (no longer the Stinking Water) and operated businesses in Cody. He died at his home in Cody in 1958.